Round and About with P T Bopanna

You are here: Home1 / Round and About with P T Bopanna 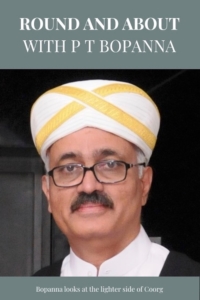 Journalist P.T. Bopanna’s ninth book ‘Round and About with P.T. Bopanna’ is a compilation of articles written in a lighter vein.

Bopanna says that, being a chronicler of Kodagu involving documenting facts, there was hardly any scope for engaging in humour or tongue-in-cheek write-ups in his previous books. Hence, he decided to put together his articles and anecdotes written with a pinch of humour.

The title of the book was inspired by the daily column ‘Round And About’ by the late Behram “Busybee” Contractor, one of India’s best known humour writers. When Bopanna was doing his journalism internship with Mid-Day newspaper in Mumbai, Busybee was working there.

In a tongue-in-cheek piece, the author recounts how decades ago, one of the main qualifications for a Kodava girl before being considered eligible for marriage, was to know how to prepare otti (flatbread made from rice).

The book also features a ‘contrarian’ point of view from a young Kodava girl who is upset with the mindset of a section of the people in Coorg, prejudiced against “overeducated, over-achiever” Kodava girls. The successful girls are being blamed for Kodava boys remaining unmarried because they are not able to find suitable girls for marriage. “They were girls who had made the mistake of paying importance to education, gotten themselves good degrees, great jobs and careers, and overall had comfortable, respectable, independent lives.”

The books also mentions the dishes that the Kodavas (Coorgs) prepared to fortify themselves during the harsh monsoon – dishes like mudre kanni (horse gram gravy), kembu kari (a curry made from colocasia leaf) and baimbale (bamboo shoot) curry.

Though most of the articles are Coorg-centric, Bopanna has also narrated anecdotes from his long experiences as a professional journalist. They include, barging into a function attended by Prince Charles, lunch with nuclear scientist Dr Raja Ramanna, and meeting the legendary Russian test pilot Viktor Pugachev.

Bopanna has also given a humorous spin to Prime Minister Narendra Modi’s decision to grow long hair during the lockdown.

The foreword for the book has been written by Prasad Bidapa, the iconic fashion guru of India.

The cover has been designed by Bhakti Saraswat-Devaiah. A computer science graduate from the BMS college of Engineering, Bengaluru, Bhakti is a User Experience Designer by profession.