You are here: Home1 / Rise and Fall of the Coorg State 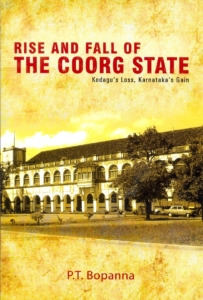 Rise and Fall of the Coorg State – tries to throw light on the circumstances leading to the unpopular merger of the erstwhile Coorg State (now officially known as Kodagu District) with Karnataka in 1956. The book also deals with the neglect of the district ever since by successive governments in Karnataka.

Author Bopanna tries to find answers to some of the questions like why the key players, including the then Prime Minister Jawaharlal Nehru, took such a short-sighted decision resulting in the snuffing out of the prosperous Coorg State forever from the Indian map.

The book discusses the growing demand for separate statehood for Kodagu and suggests the political road map for the future of the district.

The author argues that the time is not ripe for an independent statehood, but favours the setting up of an autonomous council on the lines of the Darjeeling Gorkha Autonomous Hill Council in West Bengal to look after the developmental needs of the neglected region.

In view of the general belief among the locals in Kodagu that the then Chief Minister of the Coorg State, C.M. Poonacha, was mainly responsible for the merger of Kodagu with Karnataka, Mr Poonacha’s son and noted writer C.P. Belliappa has written a chapter in the book, explaining the circumstances in which his father had to agree for the merger of Coorg with Karnataka.

Mr C.M. Ramachandra, former Editorial Advisor of The Hindu, Bangalore, who was the Coorg Correspondent of The Hindu newspaper in the 1950s when the crucial decision was taken to merge Kodagu with Karnataka, has written the foreword for the book.

The well-researched book with tables and other illustrations, has a chapter on how politicians from neighbouring districts have deprived Kodagu of its rightful share in Cauvery River water by diverting the water to irrigate the farm lands in their assembly constituencies.

There is an exclusive chapter on the Freedom Movement in Kodagu. The book also analyses the reasons for the shrinking population of the local Kodavas (Coorgs), and the exponential growth of the migrant population leading to an ‘Assam-like’ situation.

My Coorg Chronicles
Scroll to top