You are here: Home1 / My Coorg Chronicles 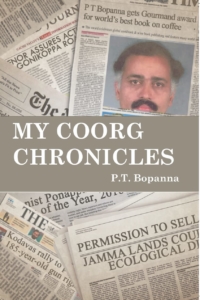 ‘My Coorg Chronicles’ traces the journalistic journey of P.T. Bopanna, his foray into writing books, his activism, and importantly his efforts to chronicle various facets of Kodagu (Coorg) district in Karnataka.

Bopanna has been covering and chronicling Kodagu for nearly four decades. His long and eventful journey started with his appointment as the Coorg Correspondent for The Hindu newspaper at Madikeri in Kodagu.

Besides reporting on the district’s affairs, he has brought out a number of books on this unique region, developed a string of Kodagu-centric websites and produced a documentary video on the land.

An important aspect of his journalistic career has been his activism in fighting for various Kodagu causes. Bopanna often leveraged his significant footprint in social media to champion these causes. In fact his online campaign ‘Repair Hunsur-Gonikoppal Road’ was a significant victory for the people over government indifference.

Bopanna, as a signatory to the petition in the Karnataka High Court, has sought the quashing of the amendment that would allow the sale of Jamma land. He has championed many other issues too, to protect the interests of the indigenous communities of this area.

He has written extensively to convince policy makers on the need to retain the Arms Exemption given to the residents of Kodagu to possess firearms.Coming to one of the most popular initiatives that were launched by Bopanna, it is the ‘Coorg Person of the Year’ title, which he instituted to recognize outstanding achievers and to create role models for the community.

The book discusses the religious beliefs of Kodavas (Coorgs), and also spells out a political road map for Kodagu. Another interesting topic discussed in the book is on the origin of the Kodavas.

The book published by Rolling Stone Publications, has colourful photographs, illustrations and a caricature of Bopanna by cartoonist Ponnappa.

The Romance of Indian Coffee
Scroll to top