You are here: Home1 / Dateline Coorg 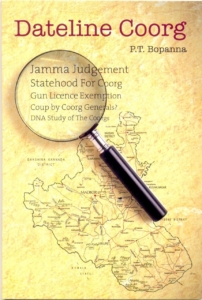 ‘Dateline Coorg’ is mainly a compilation of articles on Kodagu (Coorg) written by senior journalist P.T. Bopanna in 2010.

The book also contains the text of the full bench judgement of the Karnataka High Court on the controversial Jamma lands in Kodagu. The book offers a solution to the Jamma lands problem.

Commenting on his new book, Bopanna says: “As a journalist based in Bangalore, I had taken active interest in the affairs of Kodagu. This book will come in handy for those wanting to understand the major socio-economic issues prevailing now in Kodagu.”

The author was one of the first to report on the Union government’s move in 1993 to withdraw the exemption given to Kodavas (Coorgs) and Jamma-holders to possess firearms without licence. The Centre wanted to withdraw the privilege after guns from Kodagu reached the hands of the banned Maoists in Andhra Pradesh.

Through his reports, Bopanna was able to put across to the policy makers in Delhi that people of Kodagu not only worshipped their weapons, but seldom misused their privilege. It was pointed out that the gun-running was the handiwork of a couple of gun dealers in Kodagu who had brought a bad name to the district.

The articles in the book are diverse in nature, ranging from serious issues pertaining to separate statehood for Kodagu, Jamma land tenure, gun licence exemption, looting of forest wealth, etc., to subjects like the experiments involving the DNA study to explore the origin of the Kodavas and the moves to develop a script for the Kodava language by a German.

At the end of some of the chapters, a postscript has been added to incorporate the developments that have taken place after the articles were written.

Ms. Kalengada Sarojini Muthanna, an advocate of Bangalore, has written a chapter in the book, stressing on the need for coming out with a legislation to protect the Jamma lands.

The book has a special chapter on India’s first Prime Minister Jawaharlal Nehru’s lurking fear of a military take-over and his unease with the two most popular Generals of independent India, Field Marshal K.M. Cariappa and General K.S. Thimayya, both hailing from Kodagu.