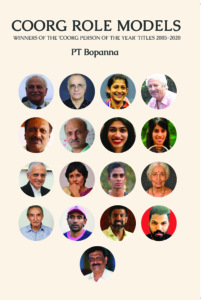 Kodavas (Coorgs), a microscopic minority community hailing from Kodagu (Coorg) district in Karnataka, were once known for their leadership qualities. This Kodava trait of natural leadership was very much in evidence in the Defence services and Kodagu came to be known as the ‘Land of the Generals’.

However, in the last few decades, the community has not produced as many exemplary personalities, except in the arena of sports.

As a chronicler of Kodagu, journalist and author P.T. Bopanna felt that one of the reasons for their inability to play leadership roles, was the absence of enough ‘role models’ in the community.

With a view to reignite the famed leadership qualities in the community, Bopanna decided to promote ‘role models’ by starting the ‘Coorg Person of the Year’ title.

The concept first took shape in 2005 and Dr Kavery Nambisan, a novelist and medical practitioner, was selected as the first Coorg Person of the Year. The selection was made based on the basis of a poll Bopanna
conducted through his news portal www.coorgtourisminfo.com. There has been no looking back since then. This book features all the winners of the Coorg Person of the Year title till 2020.

The foreword for the book has been written by Preeth Ganapathy, who is an officer of the Indian Revenue Service (IRS). She is currently posted as Deputy Commissioner of Income Tax, Bangalore.

Round and About with P T Bopanna
Scroll to top