You are here: Home1 / Are Kodavas (Coorgs) Hindus? 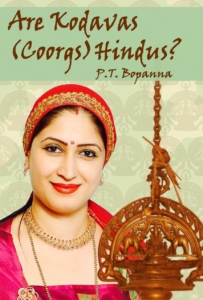 The book tries to answer the question ‘Are Kodavas (Coorgs) Hindus?’ I have involved some of the finest researchers from Kodagu (Coorg) who are knowledgeable in the matter, to find the answer to this pertinent question. To that end, this book is a seminal work on the religion of the Kodavas.

Being a journalist, I have tried to present the findings of both those who claim that Kodavas are Hindus, as well as those who maintain that Kodavas are not Hindus. The idea is to enable readers to draw their own conclusions, rather than thrust any particular line of thinking on them.

This is perhaps the first time since the world-renowned social anthropologist Prof M.N. Srinivas wrote his monumental work ‘Religion and Society among the Coorgs of South India’ (1952), that a serious effort has been made to analyze and debate the various facets of Kodava religion. Prof Srinivas’s book is based on his ethnographical study of the Kodava community for his D.Phil degree at Oxford University.

I wish to smmarize here the findings of the various writers who have contributed articles/papers for this book. My own understanding is that Kodavas are not Hindus. Though their original faith was unique and not in common with the core Hindu beliefs, the influence of Hinduism began with the Lingayat Rajas who ruled Kodagu for nearly two and a half centuries from 1600 AD.

The purpose of this book is to inform Kodavas, especially the younger generation, about their original faith and belief system. This may help them to better appreciate their original faith which is slowly being eroded due to the creeping in of Brahminical practices, as young Kodavas move away from their Kodagu roots to urban settings.

Dr. Chotteyandamada Sowmya Dechamma, an Associate Professor at the Centre for Comparative Literature, University of Hyderabad, who has done extensive research on Kodava language and culture, opines that Kodavas are not Hindus.

In her paper “Of Death, Rituals and Songs for the Dead:Kodavas and their Histories”, Sowmya notes: “A cursory glance at the customs and rituals of most Kodava-speaking peoples show that they are neither idol worshippers nor do they include priestly Brahmins in any of their ceremonies. All their festivals revolve around agricultural practices and none in the name of any Hindu god.”

Prof. Neravanda Veena Poonacha, who retired as Director of the Research Centre for Women’s Studies (RCWS), SNDT Women’s University, Mumbai, has been critical of the conclusions drawn by Prof. M.N. Srinivas in his book on the Kodavas. Veena says she was disturbed by the book “because I felt the book gazed at the Kodavas as if they were specimens under a microscope.”

She opines: “What I found objectionable was the ways by which his own caste location as a Brahmin coloured his view of Coorg society and religion. In my view, although moulded by several strands of cultural influences, Coorg culture is unique. It was a culture that did not acknowledge the ritual superiority of the Brahmin priests.”

In her article ‘In Search of Meaning – a Pilgrimage to Malethirke Forest Shrine’ Veena says: “The religious practices of the Kodavas are broadly located within the Hindu-fold and yet they are different. They do not follow any of the religious prescriptions that govern the lives of mainstream Hindu communities.”

Maj Gen Codanda K. Karumbaya, Sena Medal (Retd), who has written extensively on matters relating to Kodavas, has called for imbibing the spirit of the original Kodava tribal faith, which considered Nature as their God and ancestors as their gurus (teachers).

General Karumbaya has put forth his views on Kodava religion boldly, without trying to be politically correct. His views are stated bluntly, and he calls for a scientific approach to Kodava religion. The General notes: “In order that Kodavas emerge as a progressive community of the future with a scientific temper, I request our community members to recognize the merits of our original religion bequeathed to us by our early ancestors and discard all those false beliefs acquired from the followers of ‘religions of fear’ and ‘social religions’ with whom our destiny got entangled.”

Mookonda Nitin Kushalappa, author of two books on Kodagu, opines that Kodavas at present largely identify themselves as Hindus, almost by default, since they do not belong to any of the other major religions in India.

Nitin states: “I would like to state that the Kodavas are presently like the mainstream Hindus in some ways and unlike them in other ways. In other words, they definitely follow a distinct way of life which is, however, not completely unrelated to Hinduism. Whether we, Kodavas, call ourselves a sect of Hindus – Kodava Hindus, or followers of an independent Kodava religion is actually a question of perception and therefore of how we label ourselves.”

Roona Uthappa Ballachanda says that modern, urbanized, liberated Kodavas are increasingly clueless about how to maintain their Kodava self in the face of all the enticing new concepts around them and the gradual loss of their traditional lifestyle. “If we don’t have a strong sense of self, if we don’t take the time to spell out what makes us who we are and what is important to our identity, we won’t be able to protect ourselves against external influence and aggression. And if the Kodava is destroyed, Kodagu will follow soon enough”, notes Roona.

Under these circumstances, she argues that a religious minority status for Kodavas would give us a “strong leg to stand on, both in legal battles as well as in community endeavors.”

Getting independent parliamentary representation and full minority status for Kodavas under Article 29 of the Constitution is the road ahead for Kodavas to maintain their culture and way of life.

In their foreword to the book, researchers Boverianda Chinnappa and Nanjamma Chinnappa have called upon Kodavas to imbibe the spirit of ‘Kodavame’, or the Kodava way of life, a precious heritage handed down by their ancestors. “We hope that it will be practiced and preserved for generations to come, and continue to add to the rich diversity of faiths in India,” say the Chinnappa couple, who have gone through the manuscript of this book and offered valuable suggestions.

I have always believed that a good cover design is important for a book. The cover for my last book, the international award- winning ‘The Romance of Indian Coffee’, was designed by my young friend Franz Mendonsa, who has a Master’s in Entertainment Technology from Carnegie Mellon University. This time too, I roped in Mangaluru-born Franz, who currently resides in the United States and works on the Star Wars franchise.

Coorg: Land of Beauty and Valour

Rise and Fall of the Coorg State
Scroll to top